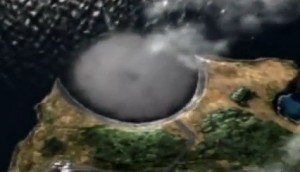 The game takes place on a fictional location known as Ibis Island in the year 2009. The Secret Operation Raid Team (SORT) has sent an agent, Tom, to investigate a military research facility. During the recon mission, he learns that Doctor Edward Kirk, a world-renowned scientist who was reported dead three years ago, is leading a secret weapons project within the facility. SORT sends four agents (Regina, Gail, Rick, and Cooper) to acquire Kirk and return him to custody.

[su_spoiler title=”The rest of the description contains spoilers” icon=”plus-circle”]They arrive onto the island via parachute. Cooper is blown off course and lands in a jungle. A tyrannosaur appears and chases him a short distance throughout the jungle before eating him. The other three agents, unaware of his death, proceed with the mission.

Once inside the base, they discover the mutilated and partially devoured corpses of security personnel and scientists. Shortly thereafter, they discover that dinosaurs are the reason behind the bloodbath at the base. After evading and disposing of many dinosaurs, Regina and the team manage to locate Kirk and apprehend him. As they are preparing to leave via helicopter, the tyrannosaur returns and destroys the helicopter, forcing them to flee back into the base.

Kirk reveals that the dinosaurs were brought to their time by an experiment he was running using his Third Energy technology. A rift in space was created and a pocket of the island from their time was exchanged with the same from the past, bringing dinosaurs back into their time. As the base becomes infested with more dinosaurs, and the tyrannosaur manages to gain entrance, the team discovers an underground river and a hovercraft. They use the hovercraft to escape before the Third Energy reactors, set to overload by Regina, detonate, wiping out all of the dinosaurs on the island and preventing them from escaping to the mainland.[/su_spoiler]

Login with your Social ID
Please support this website by adding us to your whitelist in your ad blocker. Ads are what helps us bring you premium content! Thank you!
This site uses cookies: Find out more.